Rest in Power, Brother Glen Ford -- thanks for always "afflicting the comfortable and comforting the afflicted!"

Opinion: Ken Burns is an optimist. But he’s very worried about America.
Posted by DebC at 3:26 PM No comments:

ABC never-aired this 1979 Baldwin profile. Producer was told -- No one would be interested in a “queer, Black has-been”

"Baldwin speaks frankly about outing himself to the general public with his 1956 novel Giovanni’s Room and about what it means to live as a Black man in a nation that has always favored its white citizens:

Nearly 35 years before Black Lives Matter’s formation, he tackles the issue of white fragility by telling Chase, “Look, I don’t mean it to you personally. I don’t even know you. I have nothing against you. I don’t know you personally, but I know you historically. You can’t have it both ways. You can’t swear to the freedom of all mankind and put me in chains.”
The finished piece is a superb, 60 Minutes-style profile that covers a lot of ground, and yet, 20/20 chose not to air it.
After the show ran Chase’s interview with Michael Jackson, producer Lovett inquired as to the delay and was told that no one would be interested in a “queer, Black has-been”:

I was stunned, I was absolutely stunned, because in my mind James Baldwin was no has-been. He was a classic American writer, translated into every language in the world, and would live on forever, and indeed he has. His courage and his eloquence continue to inspire us today."  (All emphasis mine)

Breaking Brown's, Yvette Carnell -- expressing the thoughts and feelings of many Black voters...

This administration continues to play e’erybody — and the MSM (fuck*n presstitute media) along with his base, have NO damned problem joining in the game, Fam. But just listen as Denzel shares Brother Malcom’s thoughts on this bullshit: 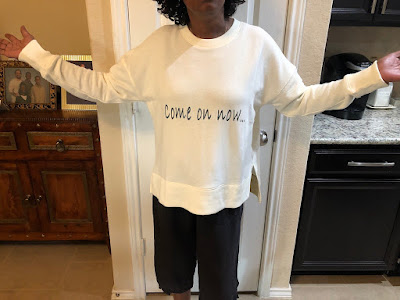 Come on now, Family (my sister-in-law gave me this shirt on my last visit to Minnesota cuz she knows me so well)!! This was a damned, publicity stunt (from the drive-by, waving to his base followers, to the 3-day release) — and they were all in on it. The little, Navy doctor, Conley at Walter Reed missed the damned memo, that’s why he had to go out and walk back that first bullshit he said! And our presstitute media’s been giving homeboy all the free press he needs for his damned re-election (Democrats are so f*ckin’ stupid). {SMMFH}

Unless and until I see some of them supposedly, ”exposed” folk are sick, near-death-sufferin’ and/or dyin’ — I’m not buyin’ ANY OF THIS BULLSHIT!

He staged it all, and because of that, more regular folk will die — and neither he, nor his motley crew will give a shit.

My husband and I took a road trip to my oldest sister-in-law's house in Minnesota with our youngest son and his lady the last week of August.
Thinking about how badly I'd been needing to get away from it all, I shelved my traveling-during-COVID paranoia and agreed to the drive up for a surprise, early birthday party for my nephew on Saturday, 8/22.  Instead of getting away from it all -- I drove right into it.
Arriving on Friday evening, we unwound at a laid back, socially distanced, driveway-hang-out that night at my oldest niece's house with her little family of three, her younger sister, their mom and my other sister-in-law who'd flown in from New York for the party.  Unlike the 100-degree temperatures we'd been suffering in Texas, the weather was GREAT as we sat under the stars talking, laughing, drinking and catching up (not via Zoom for a change).  Because we were a part of the surprise, my nephew wasn't invited but, we'd been texting back-and-forth all evening about what he'd been doing in the community since George Floyd's murder (unbeknownst to him, I WAS in Minnesota).
Then, oddly, I got this text from him at 7:25 pm (which I read to everybody else).  He said, "Listening to Ranky Tanky and thinking of you.  Love you guys and miss you all so much.  Wish I had my family here with me. Fuck Covid!"  Then he uploaded Ranky Tanky's, "That's Alright" (Long story for later about our bond over Ranky Tanky!  Suffice it to say, he respects my Gullah heritage.).  We thought our surprise was blown!  I texted him back saying, "I feel exactly the same, Nephew.  Promise we'll make that happen one day soon!"
On Saturday, per his wife's invitatiion, we had a mask-wearing, tables 6 feet apart, outside in the yard shindig that was fuck*n wonderful!!!   Minnesota being a swing state, we had some serious political and racial conversations under the tent.  I so appreciated that!
On Sunday, we spent a beautiful day at my youngest niece's house on a pontoon boat on the lake all day and finally, I felt all the tension I'd brought with me just drain away.
On Monday though, we went to the George Floyd Memorial -- and it felt like someone was squeezing my heart as we walked through the closed-off part of the neighborhood from the Cup Foods. This is what I saw first: 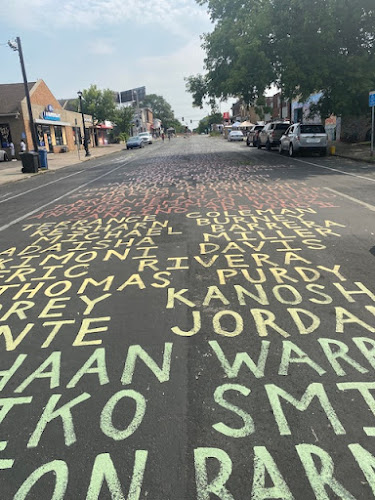 When we reached the end of the trail of names and I looked back, the stark visualization of the nationwide numbers of Black deaths felt like somebody had kicked me in the gut. My son put his arms around me and said, "Mom, it happened again." He told me about the Jacob Blake video in Kenosha, not far across the state line from where we were.  I'd slept so hard and peacefully the night before, I hadn't heard yet because I'd neither watched TV,  nor been online. He wanted to show it to me but -- I. JUST. COULDN'T.
Instead, I walked down to here, the "Say Their Names" Cemetery: 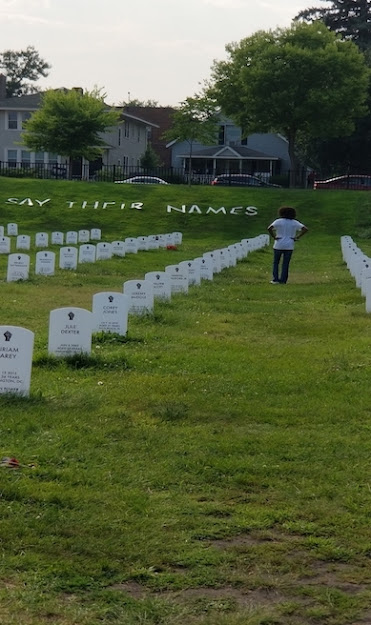 Standing in that makeshift cemetery with all those "headstones" listing the names again (but this time, along with their dates of birth and death, with their actual ages over the dash) -- I thought about Jacob Blake, his children in the car watching him get shot, and how George Floyd's very public death had neither stopped nor slowed the reign of terror in our communities by these sometimes-scared, oftentimes intentional, always-jumpy jackbooted thugs. I just started to shake my head and cry.
I knew they'd quickly be "dirtying" him up, saying the cop was "in fear for his life," putting the cops involved on pretty much a paid vacation "pending investigation," despite the video.  I also knew they'd blame him for his own murder. And they've done it all, as usual.
My nieces, along with their young children (one, a nine year-old girl and the other, an eight year-old boy), followed close behind me.  I heard the nine year-old ask her mom incredulously,  "Did all these people get killed by the police??"  Her mom said yes.  "And they ALL  had Black skin??" she asked.  Again, her mom said yes. As the kids went from headstone to headstone they stopped at the one for Aiyana Jones. The nine year-old said to her eight year old cousin, "Sal, she was only seven years old!"  My knees buckled and I bent over.  Sal's mom came up from behind me, tears streaming down her face and asked, "Are you alright Aunt Debi?" All I could do was shake my head no as we cried together.
Adding insult to injury on Tuesday night, here comes 17 year-old Kyle Rittenhouse, open-carrying against Wisconsin law when the protests broke out -- killing two people an injuring one. I was enraged as I saw cops pretty much give him the Dylan Roof treatment as he walked toward them with his long gun slung over his shoulder and his hands up (I was living in Charleston when Roof murdered the Emanuel 9 on my oldest son's birthday in 2015). Only thing missing was an offer to get him a damned burger.
So much for trying to get away from it all.
We cannot allow this to continue, Family. We've got to keep raising these issues by whatever means necessary and available.  Jacob Blake's sister said it way better and more succinctly than I ever could,  here:
Posted by DebC at 11:02 PM No comments:

7/24 -- always a day of mourning, celebration and anticipation...

I woke up this morning, rolling over and looking out my bedroom window where, for the last three years, I've seen a cardinal flying from its nest in the trees behind my back yard to my neighbors bird feeder next door.  I didn't see the cardinal this morning which, to many, is a sign of a spirit watching over you.
It's been 24 years since my mother died in Charleston on my niece's 18th birthday -- a week before my 46th birthday.  It seemed to explain the fitful, sweat-drenched, menopausal sleep I had last night.
I told the husband about it this morning and he said,"Maybe it was your Mom saying, 'You got this, Deb,' you don't need me anymore."  I think he was right, at least partially.
She was "Woman" in my life.  Sometimes gettin' the hell on my last nerve, sometimes bein' the person whom I looked up to most as friend, ally and not-takin-any-shit-from-white folk role model. I remember her coming to Immaculate Conception (ICS) to pick me and my brother up to go march in Charleston's, 1969 Hospital Workers strike, led by her friend and fellow Dreamer's Social Club member, Miss Mary Moultrie.  I was 13.
These women met monthly, pooled their "dues," had a great time playing cards, eating and talking about family and friends and had an even better time annually, as they used that pooled cash to travel America. Miss Dora, my family's next-door neighbor, is the only one left to my knowledge.
I remember her fighting her way up from short-order cook on the Navy Base to running all the cafeterias on that base.  I also remember her (respectability politics aside), demanding that we do better, be better than who she was. As I look back on my life at 63, I did better -- but I could never be better than the woman she was.
I miss you so much, Mama -- you'd be proud of these young, Black folk today!
Posted by DebC at 8:11 PM No comments: 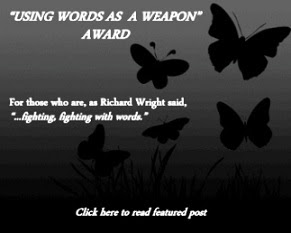